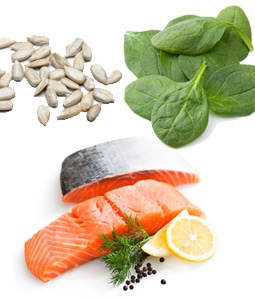 What Type of Nutrients You Should Add to Your Diet
Adding certain nutrients to your diet every day – either through foods or supplements – may help your eyes stay younger along with your vision. Some researchers believe that eye-friendly nutrients such as zeaxanthin and lutein, vitamin C, vitamin E, and zinc are useful in maintaining eye health. Zeaxanthin and lutein are important nutrients found in green leafy vegetables, as well as other foods, such as eggs. Many studies have shown that zeaxanthin and lutein may be useful in maintaining your eyes health.
• Importance of Zeaxanthin in the Diet
The role played by the powerful antioxidant zeaxanthin in the eye is to sharpen central vision (the clearness with which objects stand out from their surroundings), reduce the effects of glare (blue light), and maintain healthy visual acuity. These important functions all take place in the fovea, located in the center of the macula of the human eye. The challenge is in the supply of the macular pigment zeaxanthin. Individual levels of zeaxanthin in the body are strongly influenced by diet. Zeaxanthin cannot be produced by the human body and must come from dietary intake.

• Zeaxanthin and Central Vision:
Your eyes work by allowing light to enter through the pupil and project onto a light-sensitive wall of cells at the back of the eye known as the retina. The retina consists of millions of photoreceptor cells known as rods and cones. The macula is located in the center of the retina and is responsible for discerning color and fine detail. This area is predominantly made up of cones. The cones in the fovea are smaller and more densely packed, and are not obscured by a layer of nerve cells or blood vessels. This accounts for the sharp vision associated with them. This is where the body, in high concentrations, deposits zeaxanthin. Increasing zeaxanthin intake may help maintain visual performance over the long term.
• Vitamin C (ascorbic acid):
This antioxidant is found in fruits and vegetables. Science indicates that vitamin C can benefit long-term eye health.
• Vitamin E:
In its most biologically active form, Vitamin E is a powerful antioxidant found in nuts, fortified cereals, and sweet potatoes. It is thought to protect cells of the eyes from damage caused by unstable molecules called free radicals which break down healthy tissue.
• Essential Fatty Acids:
These acids are a necessary part of the human diet. They maintain the integrity of the nervous system, fuel cells, and boost the immune system.
• Zinc:
Zinc is an essential trace mineral or ‘helper molecule.’ It plays a vital role in bringing vitamin A from the liver to the retina in order to produce melanin, a protective pigment in the eyes. Zinc is highly concentrated in the eye, mostly in the retina and choroid, the vascular tissue layer lying under the retina.
• Selenium:
When combined with carotenoids and vitamins C and E, selenium may be of specific benefit to eye health. It can be found in the following foods: shrimp, crab, salmon, halibut, Brazil nuts, enriched noodles, brown rice, or via supplements.
×
×